On Tuesday, May 12th, we were introduced to unprecedented global cyberattacks known as “WannaCrypt” or “WannaCry”. This prolific ransomware attacked and infected tens of thousands of Windows-based servers and workstations, critically impacting financial firms, transportation infrastructure, and even the British National Health Service. 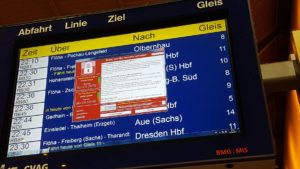 Towards the end of last year, Microsoft started warning customers about best security practices with regards to Windows devices and the SMB protocol. The National Security Agency developed tools that could gain unauthorized access by exploiting Windows vulnerabilities, and likely used them to monitor the SWIFT interbank messaging network.

Rumors of the theft of the NSA’s hacking tools started to spread, and by February, the NSA alerted Microsoft so vulnerabilities could be addressed. In March, Microsoft quietly released security updates. By April, the hacking tools were publicly released.

We anticipate variants of this attack to continue over the next few months. Unsupported and non-updated Windows systems will remain at risk.

Guidance for the Home

Ransomware can attack your systems, disrupt your business and permanently destroy your data. We strongly recommend upgrading or removing unsupported systems, regularly updating your devices and ensuring backup systems are up-to-date. If you need help updating, securing or backing up your systems, or have any questions, we are here to help you – contact us now.
If you’re not yet an RWA Managed Services contract client, please contact us to schedule your free first-time Health Check assessment. We provide expert solutions to meet your needs and maximize the return on your IT investment.
/wp-content/uploads/2017/08/logo-rwa.png 0 0 The Editor /wp-content/uploads/2017/08/logo-rwa.png The Editor2017-05-17 14:48:382018-10-12 17:54:27The "WannaCrypt" Global Cyberattack
New Features in Windows 10 Creators Update

Who Provides IT Support for Your Business When Your IT Guy Is on Vacation?
Scroll to top